A Grill For All Seasons 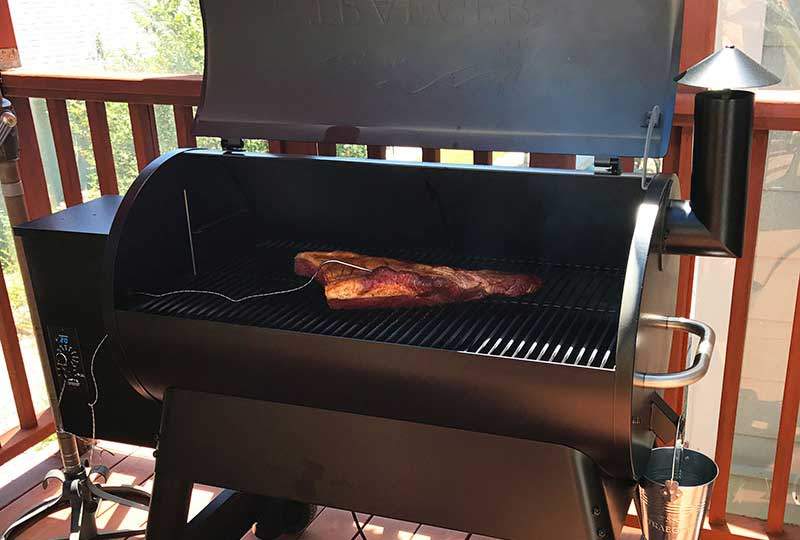 Just a little over 3 years ago I wrote a blog post called The Grill Next Door. I went back and reviewed it in preparation for this post. At the risk of breaking my arm patting myself on the back, it is pretty good piece on some suggestions you might consider in maintaining your grill and preparing it for grilling “season” if you’re one of those who thinks there is such a thing. The reason I wanted to review the post was because I finally broke down last week and bought a new grill. It’s actually a little more complicated than that…

It all started when Jackson, our 16 year old, agreed to grill up hot dogs for an event at Community Market’s Earth Day Celebration. I was busy cutting in the butcher shop and asked him to load up my trusty Weber in the back of his truck and bring it down to the market. I was very specific about tying it down. Apparently not specific enough.

He got it loaded up just fine. And then used the ratcheting tiedowns I use for almost any load. Unfortunately, the tie-downs don’t come with an instruction manual. In all fairness to him, if you have never used them, they are a bit of a conundrum. Where I scratched my head (OK, lost my mind) is that something is generally tied in tight or it’s not. Granted, like any bag of potato chips, some settling may occur and that which started out securely tied in may loosen enroute. But generally speaking, it won’t loosen to the point of flipping over the side of the truck and shattering into about 20 pieces. I know, he has a 16 year old brain, and doesn’t think like I do about most things. And I was actually complimented by him and Laura for not losing my cool, at least on the outside. Inside my head was a whole ‘nother story…

In The Grill Next Door I spent some time describing my love affair with my 20+ year old Weber. So it was with some sadness that I put it out on the street and watched as a local guy who recycles metal started chucking pieces of it into his truck to become a gutter or something. But as with most things in life, there was a silver lining; I was forced to buy a new grill. Time to do some research!

I have had this dream for some time about finding the unicorn of meat cookers, one that smokes as well as grills, and does both well. Oh, and it needs to have the convenience/instant gratification of a gas grill and create the flavor of grilling or smoking by burning hardwood charcoal. Other than that, I will settle for whatever you got!

Sometime ago I had started looking at pellet cookers. The idea intrigued me as you got all the smoke flavor at whatever temperature you like. What always ended the discussion for me was the inability to sear. With a pellet cooker, you are pretty much relegated to indirect heat by design. I don’t care how hot the ambient temperature gets, without direct heat, you just can’t properly sear something. And as a huge proponent of a perfectly seared steak, this seemed like a solid reason to simply replace my old Weber with a new Weber. And then something interesting happened…

I am a firm believer that there are no coincidences. So when Laura came into my office and wanted to talk about the hazards of charred meats, I took it as a pretty strong signal that I may need to do some more research. I decided that I should go down to our local hardware store and talk to the owner about his recommendation. Total sidebar here, but that is a great reason to buy from your local guy instead of going to the big box store. I can almost guarantee that the service and knowledge you get will far outweigh the few bucks you save online or at Costco. Sebastopol Hardware does a great job of having experts in every department, and Doug and his staff did a great job of making the process of buying my new cooker super easy. I hope you have a store like that in your neighborhood. But I digress…

So when I went to Sebastopol Hardware to take a look at what they offered I quickly narrowed it down to two options. Either replace my Weber with another, or make the transition to a pellet cooker. And there was no shock on my face at all, because I don’t believe in coincidences, when Doug mentioned the huge parking lot sale and demo day just for grills they were having the coming weekend… it was like the universe was leading me by the hand to my new cooker!

So, off I went on a sunny Saturday afternoon to see what’s what in the grill world. Imagine my surprise when the Traeger rep was the featured guest at Sebastopol Hardware’s Grill-A-Polooza (they didn’t call it that, but they should have). Traeger is the industry leader in the pellet cooker industry. You may have noticed that I have called it a cooker, not a grill. This is because it smokes, grills, roasts and even bakes! The heat source comes from the burning of hardwood pellets that come in a variety of smoke-tastic flavors. The beauty of it is that temperature is controlled by varying the speed at which the pellets are fed to the fire box. This means that you can set the temperature where you want it and the cooker will maintain that temperature within 5-10 degrees for as long as you feed it pellets.

At any rate, I did my due diligence, and after a little pang of guilt for parting ways with Weber (a great company and product by the way) settled on the Traeger Pro34. After explaining that I wanted to take it on its maiden voyage with a 7lb brisket the next day, Doug from Sebastopol Hardware promised it would be assembled and delivered the next morning. Try getting that kind of service at Home Depot!

And so, on Sunday it took the place of honor on our deck and I spent an hour reading all the do’s and don’ts of preparing it for its first test. To my intense satisfaction, it behaved exactly as promised. Fired right up, burned off the factory oil, and was ready to smoke my brisket. I’m not big on recipes, as most of our faithful Meatheads know, but in this case I decided to follow Treager’s lead and cook it exactly as recommended.

The recipe I was using called for three hours of smoke, then wrap it in foil with some of the mopping liquid, and cook for another 3-4 hours. I was going to be cutting it close for dinner, but we could eat a little late in honor of our newest family member. I put it on at 1pm, we would be noshing on perfectly smoked brisket by 8-ish. Or so I thought.

After three hours of delicious hickory smoke, the brisket looked awesome and I wrapped it up, set the temp to 225, checked that the pellet hopper was full, and went off to do other things. “Set it and forget” they said, so that’s kinda what I did. That’s how I found out about tunneling.

Tunneling is when the hopper full of pellets develops an air pocket. Imagine an hour glass as the sand drains out of one side to the other and that “hole” that develops in the middle. That’s tunneling. Well, tunneling creates an air pocket where no pellets get delivered to the fire box. This is not a big deal if you are paying attention. We now know that we need to give a few raps on the side of the pellet hopper every so often to keep it flowing. On this maiden voyage I did not know this. And so my brisket sat….at 100 degrees…for at least an hour. Dinner at 8 wasn’t going to happen. Neither was dinner at 9…or 10.

So, there I was, alone on the couch, the rest of the family long since in bed at 11:20pm when my brisket reached perfection at 195 degrees. I took it off the cooker, let it rest for about half the time I should have, and started carving. It wasn’t perfect. But it was damn good. I forgot the cardinal rule of cooking with pasture raised meat: It cooks faster than CAFO meat and doesn’t need to be cooked to as high a temp. So, it was a tiny bit dry. But man was it tender and smokey. And it was the best brisket I had every had right off the smoker at almost midnight.

We have a long way to go in the test drive phase, but my initial reaction is WOW. I love the concept, and am thrilled with the initial results. We have cooked up two chickens and after less than an hour at 450, they were tender, juicy and just a hint of smoke. I will keep you posted as we try different things, particularly when Molly gets a cheesecake on that bad boy. Smoked Cheese Cake….who woulda thought?