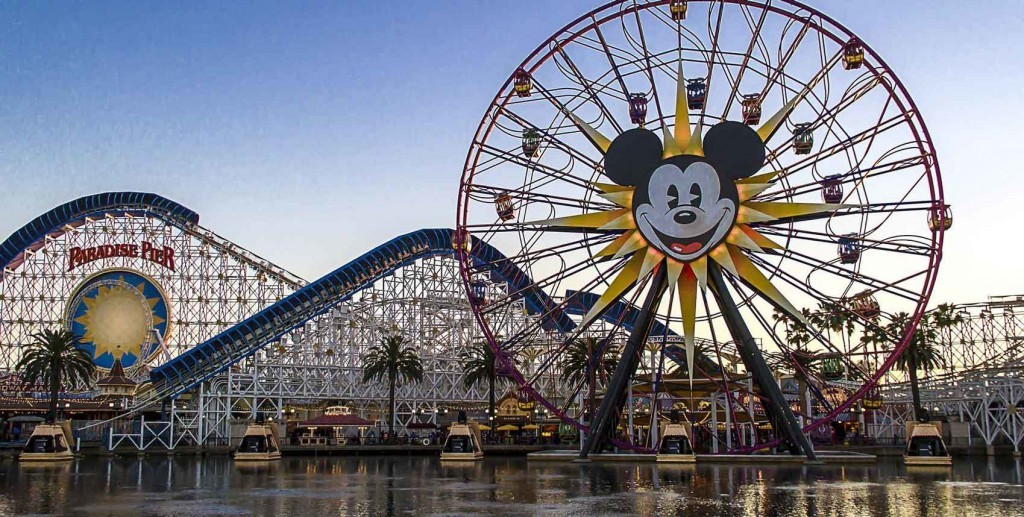 In the midst of all this change, it was time for our annual family vacation. I really can’t make this stuff up. Two key employees are on their way out and two brand new employees were left to man the mother ship. Russell and Diana did an amazing job keeping everything flowing and making sure that everyone got what they ordered. And Josh and Justin picked up the ball and ran with it.

This may come as a surprise, but I’m not that great at taking vacations. I just have a REALLY hard time relaxing, not knowing exactly what’s going on in the shop and at the markets. Did Joe get his paper thin Rib Eyes in Moraga? Did Arlene get enough marrow bones for her weekly batch of broth? And would the guys remember to pack the one home delivery we have every other week for Michael? These things weigh on me. But with all the turmoil at home this turned out to be the best family vacation ever! 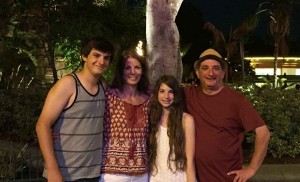 First a little about the plan. Oh, you better believe there was a plan. You see, Laura and I had been paying for a week long Disneyland vacation for about 8 months. Total side bar… but if you are like us you can’t just drop three grand and take off for the Disneyland Hotel. Enter the fine folks at GetAwayToday.com. We have used them a few times now and they are awesome. You plan where you want to go and where you want to stay and basically put it on layaway. The have outstanding customer service and take care of all the extra things like tickets for side trips. Anyway, the plan was to do the Vets Hall Farmers Market on Saturday and take off after for LaLa land. So much for a great start.

Due to a couple of unforeseen occurrences, there was nobody to man the shop on that Saturday. Thanks to my lovely bride, we had purchased the insurance that allowed us to move the whole thing back a day. So at 5am Sunday our vacation and 8 hour drive got underway. One reason this was such a great trip was Molly and Jack made it really easy. I hate to say it was because they had ear buds jammed in their skulls the whole ride, but that definitely helped. Not a single “are we there yet” or “stop touching me” was uttered the entire trip. More about them later….

Anywhooo, across the Bay Area and down I-5 we went. I actually like driving long distances. I’m a big “books on tape” (how’s that for dating myself???) guy. Now, of course, that is books on iPhone. When traveling with Laura this means I have to have two books. The first is for me to listen to. The second is for us to listen to for the 4 or 5 minutes she is awake. The tricky part is figuring out when she is asleep and when she is “just resting her eyes”. It’s a delicate balance. All in all the ride down was blissfully uneventful.

It has been four years since we have visited the happiest place on earth. One of the great things we found last time we went was the Hyatt Regency in Anaheim. There’s nothing special about the hotel as compared to other Hyatts. Unless you count the KID SUITE! That’s right, two room suite…one with a king size bed and one with bunk beds and its own TV. Seriously, that could be a vacation in and of itself.

Last time we went Laura and I realized why, if you buy a three-day Park hopper, the fine folks at the Magic Kingdom give you a fourth day for free. When you have young kids, ours then 7 and 9, four days would result in grievous bodily harm to someone. Nobody with kids between 2 and 10 WANT four days at Disneyland. However, when your kids are in that sweet spot between the kids attention span of a gnat and the bitter angst of a full-blown teen, day 4 is necessary to complete the rare feat of hitting every ride/activity/show that all four of us had on our Disney bucket list. As long as we stuck to Dad’s plan….

We had a secret weapon that made this trip extra special and gave mom and dad a break from time to time. Grandma Sally drove down to meet us there. This is a key part of the story for a few reasons. First, anytime you can go on a family vacation and mom and dad get even a few hours to their selves it’s going to make for a much more enjoyable week for everyone. Second, there was the rollercoasters. Ohhhh, the rollercoasters….

See, last time we went, Jackson went on his first rollercoaster. It was California Screamin’. It’s the best that either park has to offer as far as roller coasters go. I figured that if I could talk him into that one at 9 years old and he liked it, he’d be hooked. Why wouldn’t that work with Molly??? We had spent some time discussing rollercoasters. A year ago I never would have bothered even asking Molly to go on one. Last time we went she melted down on Pirates of the Caribbean. But lately she had become much adventurous. All of a sudden, she likes spicy food, pickles and now rollercoasters. Ahhhh, Daddy’s girl!

What I didn’t know was that amongst all this talk of rollercoasters, Grandma Sally had chimed in. Sensing that it wouldn’t mean anything, she at one point offhandedly mentioned that if Molly went on California Screamin’ she would as well. This would have been a safe bet last year. However, this was the new and improved Molly. Grandma was in trouble. 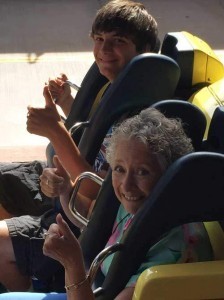 We got our Fast Passes early and showed up on schedule. It was Spring Break and the longest we waited for any ride was 45 minutes. That’s planning, my friend. I think we waited about ten minutes for the big coaster. The four of us decided that Jackson would ride with Grandma and Molly and I would ride together. Oh, one other thing. Jackson and I have a strict policy that the first time we ride a rollercoaster (and any other time we can), we ride in the front seat. So, we had to wait a few extra minutes. No big deal. Unless you are soon-to-be 70 year old Grandma Sally. Turns out, unbeknownst to me, this was her very first rollercoaster. How cool is that?!?!?

Every step closer, she turned a little greener. I kept telling her that she could bail out, but she would have none of that. And so she got on the beast, in the front seat with Jackson, and I’m pretty sure for the first time in many years….prayed. 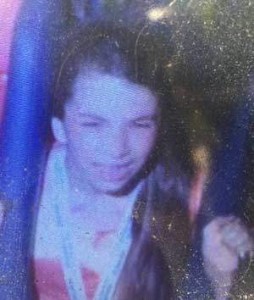 I am sad to report that in all the excitement we only got the before picture of Grandma Sally. We were too late to see the “Scream Cam” shot of them. But we did get this one of Molly and me. Eventually she admitted liking it a lot. In fact she rode every ride the two parks have, proclaiming Indiana Jones as her favorite. I did have to explain to her that mid-ride “I’m going to be sick” is only used if you are actually going to be sick and it’s better to use that energy to not be (also another reason why I will only ride in the front of the ride).

That’s it for this week. But check out next week’s blog for the rest of our stories from the road!