Love Of The Lamb! 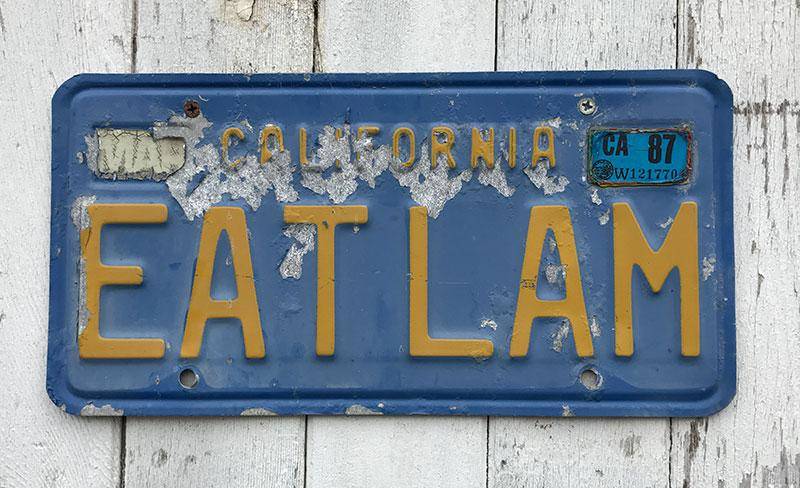 Lamb has a special place in my heart. Growing up on a thousand-acre sheep ranch, it’s kinda in my blood. So much so that Super Sally (my mom) had a 1978 Chevy station wagon with the license plate “EATLAM”. You know how old that is when you consider that six was the maximum number of letters you could have on a license plate!

We may be biased but we think that Northern California Coastal lamb is as good as it gets. My grandfather used to say that it tasted so good because the fog carries in the ocean water and seasons our pastures. I don’t know it that’s really how it works, but I sure love the idea of it.

Lamb is probably the most interesting meat we sell, as it creates the most conversations. Folks that we meet for the first time generally either love lamb or won’t eat it. And, if they happen to be part of a couple, it seems more often than not, they each fall into different camps. I thought it was time to shed some light on this predicament and see if we can’t save some marriages while we’re at it.

Those who claim to not like lamb usually have one of two objections; it’s either the cute and cuddly thing or it’s the greasy/gamey thing. Look, we get it…when they are very young, and long before harvest time, they are pretty dang cute. If that’s your objection to eating it, we totally understand. If it helps, they’re not that cute at harvest time…but I don’t suppose that actually helps.

The “greasy/gamey” thing is a whole ‘nother can of worms and we can definitely argue that one! Most people who think that lamb is too greasy or has a gamey flavor probably have been subjected to mid-west or Australian corn-fed lamb. This is a staple in many high end restaurants, as it is a cheap way to serve a dish with a higher perceived value. Unfortunately, that corn-fed lamb gives well-raised lamb a bad rap. The corn is super high in sugar and that is what creates the high fat content and gamey-ness.

Our lamb, raised by our good friends at BN Ranch in Bolinas, is fed pasture only. It has a very clean, almost sweet flavor. Even the fat has incredible lamb flavor, without the “heavy-ness” of grain fed lamb. We have found that those who tell us they don’t like the flavor of lamb they have had in the past are quick converts if they take a chance and try ours. Here’s a perfect example…

My beautiful wife Laura was not having any of this “try it, you’ll like it” nonsense for the first several years of our marriage. She simply wouldn’t even try it. Then one day she lost a bet! I wish I could remember what the bet was about, but alas I can not. Anywho, my victory meant that she had to eat a whole lamb chop. The transformation was instantaneous. OK, that might be a stretch. But she did decide it was much better than she remembered it. And that, my Meatheads, was a sweet victory indeed.

To be fair, it is still not her favorite protein. But she likes it enough to have it often enough to keep it on my plate. Or maybe she just loves me enough…never mind, never question a winning hand. The point is, she tried it and liked it! We have heard countless stories similar to this from folks who we had this very discussion with over the years. Look at us, saving marriages!

The other frequent discussion we have revolves around the statement “I love lamb, but I don’t know how to cook it”. My stock answer is “yes, you do”. Lamb is very similar to beef, just a little leaner. The animals are also built pretty much the same way. If you pick up a pair of lamb loin chops, they are the same as beef Porterhouse. A Lamb Shoulder Roast is pretty much the same as a Beef Chuck Roast. You get the idea. Any of our farmers market guys are pretty adept at giving advice on how to cook any cut we sell, and lamb is no exception.

Here are a couple of things to keep in mind when cooking lamb. As I mentioned, it is a little leaner than beef and thus should be cooked to a slightly lower temperature. I like mine on the rare to medium rare side, so I cook chops and steaks to around 125-130 degrees. Fattier cuts, like shoulder roasts and Denver Ribs, I cook to 165-175. 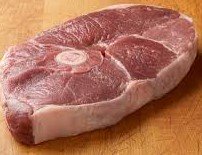 Seasoning is another topic we love to talk about. I think our lamb has an incredible natural flavor, so I really don’t like to over season or marinate it. One of my favorite cuts is Lamb Leg Steaks, and here is how we do it. Leg of Lamb is incredibly tender and flavorful, but we just don’t always have time to roast a whole leg. Leg Steaks are a perfect compromise!

Just take some chopped Rosemary, chopped garlic, coarse salt and pepper, and just enough olive oil to form a paste when you mash it all together. When you pull your steaks from the fridge (this mash works on many lamb cuts, FYI), spread it all over both sides and leave it on the counter for a half hour or so. This lets the meat come to room temperature and forms a beautiful and delicious crust.

Now, grill/broil/pan fry over high heat, turning just once when the first side is seared. This keeps the crust from falling off. Using a meat thermometer, cook until you reach your desired temperature. Remember to leave five degrees for residual heat once you take it off the grill and let it rest. This allows the juices to redistribute so they don’t run out all over your cutting board when you slice and serve.

Hopefully, we have not only put to rest some of the concerns we hear about eating lamb, but made you hungry! It is just too good to pass up out of preconceived notions or bad past experiences. And next time you make a bet with your partner who “doesn’t like lamb”, try making the wager like I did. You might just open up a whole new world for your beloved!