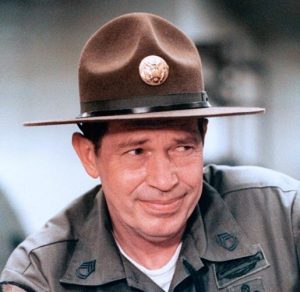 Well, we are smack in the middle of the holiday season. Roughly halfway between Thanksgiving and Christmas, in the middle of Hanukkah and at least making plans for New Years Eve. It’s a time when we stress out over making other folks feel loved. Don’t misunderstand, it is my favorite time of the year. As many of you know, my family used to have  a Christmas Tree farm so celebrating the holidays is in our blood. Yet sometimes it feels like we are going out of our way to be offended. How weird is that??? Let me explain what got me thinking about this and what the heck Sargent Hulka has to do with any of this…
PETA put out a press release demanding the abolition of phrases like “bring home the bacon” and “kill two birds with one stone” this week stating that “species-ism” is cruel to animals. Seriously, I couldn’t make that up on my best day. Now, while I may not agree with their position on several serious matters this seems like a plea for help. You have to be completely out of ideas for things to complain about for this to come up in a brainstorming session of what to protest next. “OK people, this week we are picketing duck farms in protest of the ducks being left out in the rain. What’s up next week?” After several awkward silent minutes a meek voice in the back “Here’s an idea…”
And as if that wasn’t strange enough, radio stations are apparently banning the song “Baby, it’s cold outside” because some find it offensive to women. To be honest, gun to my head, I could not have told you what that song was about until this SNAFU came up.
What are we doing, people?!?! What happened to sticks and stones and all that? I’m all for progressing as a society. I firmly believe that animals we eat should be treated better than the factory farms are allowed to treat them. I firmly believe women should be treated as equals in ALL ways. Not to beat a dead horse(add it to the list), but this has gotten way out of hand.
The capper for me is the folks that are offended by the term Happy Holidays. “Put Christ back in Christmas” they insist. Who took him out??? Happy Holidays is just a way of including everyone in my good wishes if I don’t know what you celebrate. Unlike Facebook and the government, I don’t keep track of your religious affiliations. If I happen to know you are Jewish I will probably greet you with Happy Hanukkah. If I saw you walk into the local Catholic Church last Sunday you will likely get a Merry Christmas. At the end of the day, I’m just trying to wish you a happy holiday season. In the immortal words of Sargent Hulka “Lighten Up, Francis!”.
With all that is going on in the world, how do we possibly have the bandwidth to be offended by such trivial matters? This is the time of year when we are almost forced to be nicer to each other. One thing I have learned over the past few years is that I can do things I never thought possible if I make it a habit, and it really doesn’t take all that long for me to create a habit. I just have to take the first step!
So my wish for all of us this holiday season is that we take the fact that we are being “forced” into being nicer to each other and use that as an opportunity to make it a habit. Let’s stop being so easily offended by what others say, and that includes me being offended that someone else is offended (I think that made sense…). I mean, if I can choose to not be offended by nonsense like I referenced above then maybe there’s a chance this could work! And if I am walking around this world less offended I will probably be a lot nicer to be around. And if I’m nicer to be around then maybe folks will be nicer to me. I think this is the very definition of a vicious cycle, in the nicest way possible!
Happier Holidays, Everyone!

Thanks for signing up!